Santan Bab's Memorial Clinic at Varca completes a centenary this year. Now as it joins up with the family's Vita Nova Group, it continues to promote the cause of holistic treatment, naturally.

A century ago, when medical doctors and facilities were a rarity in Goa, the locals harvested nature for its curative properties. Living in the lush environs of Varca behind the church, Dr Santa Marins combined the goodness of nature with medical science through his practice of naturopathy. A century later, the clinic continues to draw patients as grand-daughter-in-law, Dr Myra Martins, pursues the homoeopathic line of treatment. A glance around this ancestral clinic attached to the house, which has undergone a few renovations, is reminiscent of the medical practices of the Martins family. Gynaecology instruments, old weighing scales and charts linger on from the old days since 1914. "My great-grandfather was a well-known naturopathy doctor. He had three sons, two of whom became dentists. The third my Grandfather Dr Joao Marcus Martins, through a GP, conducted a lot of Deliveries. My father, Dr Senon Martins, and my mother, Dr Myra Martins are both practising homoeopathy doctors, and my brother, Dr Silroy and I have followed in their footsteps,” says Dr Dorland Martins, explaining the family tree. “In fact my mother is the second registered homoeopathic doctor in Goa”

“The Martin’s path to medical success was first peeved by great-grandfather and founder Dr Santan Martins. Patients from Goa as well as neighbouring; Hubli and Karwar would queue up outside his clinic. The queues were so long that in the afternoons “cunjee” was boiled in a huge vessel and distributed to the waiting patients. Outstation patients were allowed to spend a night at the clinic. They would leave the next morning after collecting their medicines” says Dr Martins recalling the stories handed down the generations.

Famed for curing typhoid, malaria, kidney-related ailments, anaemia and liver problems in children and cirrhosis of the liver in alcoholics, Dr Santan Martins often visited patients as far as Cabo da Rama on his bicycle. And, at a time when cars were rarity, he was only the second person in Margao to purchase one.

The new generation doctors, Dorland and Silroy have now brought in a fresh perspective to the practice to create more awareness and attract people to the more holistic homoeopathic way of treatment. “We have created a chain of homoeopathic clinics VitaNova with a team of other doctors and have set up new clinics at Patto-Panjim and Comba-Margao in addition to the ancestral clinic” states Dr Martins

With a general trend indicating a return to naturopathy and homoeopathy, Dr Martins is confident that homoeopathy, which is the second-largest system of medicine followed in the world, is likely to be the first choice of treatment in the future. 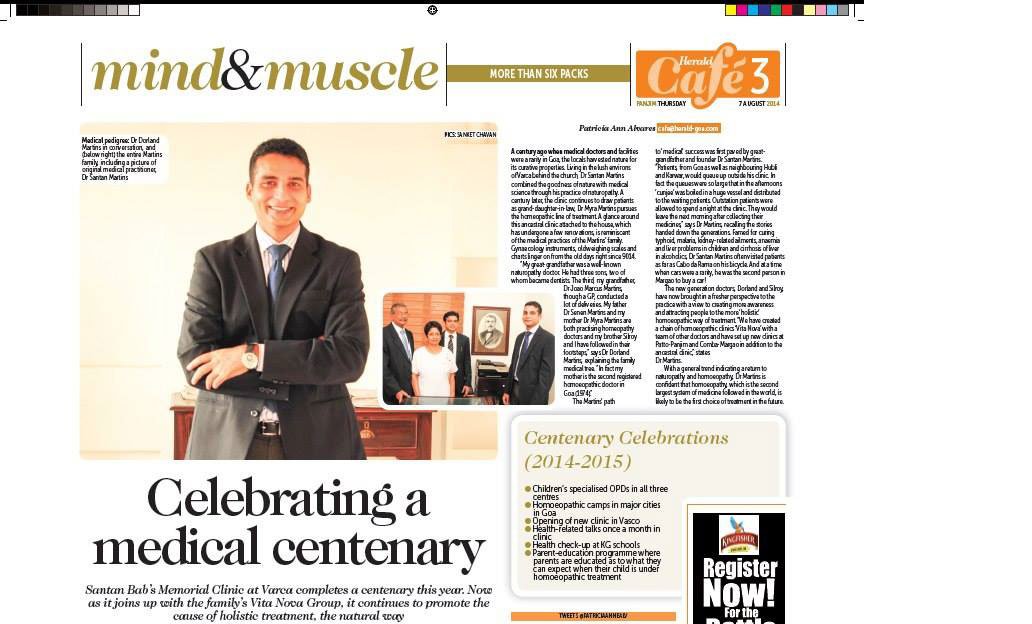